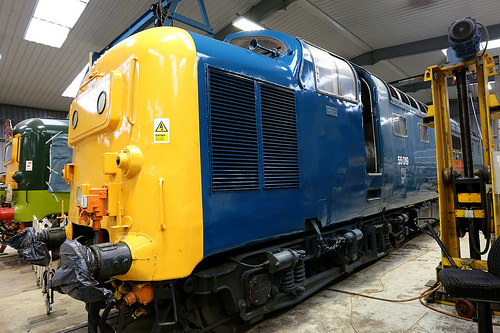 In another shed at Barrow Hill, the remaining members of the wonderful class 55 are tended to and maintained.

The British Rail Class 55 was a class of diesel locomotive built in 1961 and 1962 by English Electric. They were designed for the high-speed express passenger services on the East Coast Main Line between London King’s Cross and Edinburgh. They gained the name "Deltic" from the prototype locomotive, British Railways DP1 DELTIC (the running number DP1 was never carried), which in turn was named after its Napier Deltic power units. Twenty-two locomotives were built, which dominated express passenger services on the East Coast Main Line (ECML), particularly London – Leeds and London – Edinburgh services, until 1978 when InterCity 125 ‘High Speed Trains’ were introduced. 1978–81 saw them gradually relegated to semi-fast or newspaper–parcel–sleeper services along the ECML (destinations including Cambridge, Cleethorpes, Harrogate, Hull, Scarborough and Aberdeen) plus occasional forays ‘offline’ such as York – Liverpool Lime Street semi-fast, and Edinburgh – Carlisle via Newcastle stoppers. The fleet was withdrawn from service between January 1980 and December 1981. Three locomotives were retained for a few days, until 2 January 1982, to work the farewell special, all being withdrawn immediately on arrival back at York. Six locomotives entered preservation during 1982 and 1983: one by the National Railway Museum, two by the Deltic Preservation Society, two by the Deltic 9000 Fund and one privately owned. Two cabs were also privately purchased

Following trials with the prototype DP1 Deltic locomotive, which was built at the Dick, Kerr & Co. works in Preston, an order was placed with English Electric for a production fleet of 22 units (reduced from the originally-planned 23[3]), replacing more than twice that number (55) of Gresley Pacifics. The locomotives were purchased under a service contract, English Electric agreeing to maintain them, including their engines and generators, for a fixed price; this was British Rail’s first such contract. Additional Deltic engines were produced to enable engines to be exchanged regularly for overhaul while keeping the locomotives in service.

The locomotives were assigned to three locomotive depots: Finsbury Park in London, Gateshead over the Tyne from Newcastle, and Haymarket in Edinburgh. They arrived from the manufacturer painted in two-tone green, the dark BR green on top, with a narrower strip of a lighter, lime green along the bottom. This helped to disguise the bulk of the locomotive body. The cab window surrounds were picked out in cream-white. Although delivered without it, they all soon sported the bright yellow warning panel at each end common to all British diesel and electric locomotives, to make them more conspicuous. Very soon, all were named; the Gateshead and Edinburgh Haymarket locomotives after regiments of the British Army from the North-East of England and from Scotland, respectively, while London Finsbury Park followed the LNER tradition of naming locomotives after winning racehorses.

By 1966 they began to be painted in corporate Rail Blue with yellow ends, the change generally coinciding with a works repair and the fitting of air brake equipment, the locomotives originally having only vacuum braking (the first so treated was D9002; the last to be painted blue was D9014). In the early 1970s they were fitted with Electric Train Heating (ETH) equipment to power the new generation of air-conditioned coaches, while a couple of years later, with the introduction of BR’s TOPS computer system, they were renumbered 55 001 to 55 022. In 1979, Finsbury Park restored the white cab window surrounds to their remaining six Deltics, making them distinctive, although these were later painted over when the locomotives were transferred to York during the rundown of the depot at Finsbury Park.

The introduction of the Deltics was a step change in locomotive performance on the East Coast Main Line. The recently introduced Class 40 diesels had an absolute maximum drawbar horsepower of 1,450[4] and this could be exceeded by a Pacific steam locomotive if worked hard. On one of O. S. Nock’s first Deltic runs (the down Heart of Midlothian loaded to 13 coaches, 530 tons gross) he states "once the tail of the train was over the 60 mph restriction the throttle was opened to the full, and the surge forward could be felt in the cab. Never previously had I felt a positive thrust in my back when in the second man’s seat!" Nock went on to estimate that at 80 mph the locomotive was producing about 2,750 drawbar horsepower.[5] As early as 1963 Deltics were recorded exceeding 100 mph, Nock recording 100 mph for 16 miles south of Thirsk with a maximum of 104 mph; he went on to say that such speeds in 1963 were "terrific".

By the mid 1960s, the Deltic-hauled Flying Scotsman was achieving a 5-hour 55-minute time from King’s Cross to Edinburgh with one stop at Newcastle[6] and this was the fastest ever timing, beating the pre-war A4-hauled "Coronation" service’s 6 hours, and without the priority over other traffic accorded to the earlier LNER train. As the East Coast Main Line was upgraded, times dropped still further and by the mid 1970s the Flying Scotsman was reaching Edinburgh in 5 hours 30 minutes, still with one stop at Newcastle.[7]

The ultimate Deltic performance came on 2 February 1978 with a run on the 07:25 from Newcastle to King’s Cross. In some respects the run was set up (the driver was about to retire) but the speeds were record breaking. The locomotive was 55 008 The Green Howards, it was hauling 10 coaches (343 tons gross), and on the leg from York to London it achieved a timing of 137 min 15 sec. This included various signal stops and other enforced speed reductions; the net time is estimated at 115 min 45 sec, an average of 97 mph start to stop. The train achieved 113 mph on the flat between Darlington and York, 114 mph at Offord and 125 mph whilst descending Stoke bank.[8]

The Railway Performance Society estimate that on modern infrastructure (the Selby Diversion etc.) a realistic Deltic-hauled schedule from King’s Cross to Edinburgh would be around 4 hours 57 minutes (a theoretical unchecked run being around 4 hours 40 minutes).[9] This would be for a train of 11 coaches and include a stop at Newcastle, the latter city being reached in a scheduled 3 hours 6 minutes. 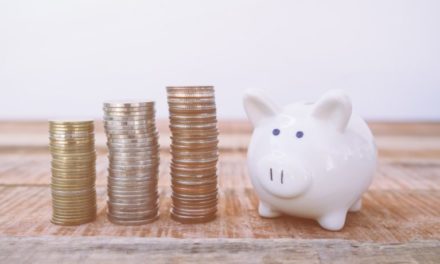 4 Tips To Build A Corporate Compliance Training On A Budget 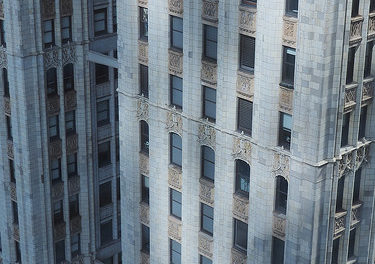 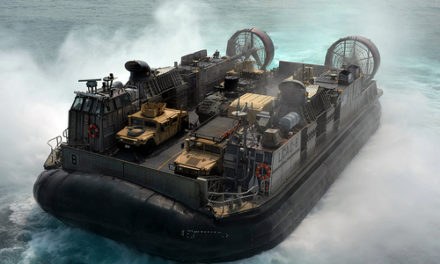