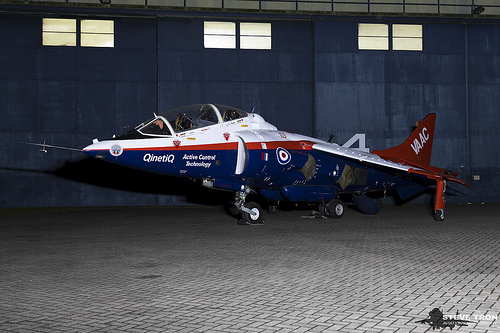 Harrier XW175 was unique as a military aircraft as it spent all of its working life at RAE Bedford and Boscombe Down in support of innovative STOVL research programmes. XW175, a two-seat second development batch T2 aircraft, first flew in 1969. It was delivered to RAE Bedford from BAe in February 1975. The aircraft extended the VTOL legacy at RAE Bedford following the Bedstead and the Short’s SC1, and operated in research and development tasks for future STOVL concepts.

In the early 1970’s RAE was tasked by MoD to enable Sea Harriers to recover to a vertical landing on a ship at night in poor visibility. XW175 was allocated as the trials aircraft and thus began its illustrious 38 year research career at RAE Bedford and then post 1996 at Boscombe Down.

In the early 1980’s, studies into future advanced STOVL aircraft concepts, as a planned replacement for the Harrier, indicated that flight control at low speed and hover would be more complex than the Harrier. This situation started a research programme into novel pilot control methods to address ASTOVL control and was led by XW175. The basic idea was that the pilot’s control of the aircraft was to be as similar as possible to conventional aircraft thus significantly reducing type conversion time for pilots and the training costs.

To test the design principles the aircraft had to be converted to a fly-by-wire aircraft such that digital techniques could be implemented. The aircraft modifications were made at the College of Aeronautics, Cranfield, The installations provided a full authority fly-by-wire system with links to the aerodynamic surface actuators and the engine thrust and thrust vector control actuation. It retained the basic mechanical control system to provide flight safety and meet airworthiness requirements. This approach allowed software to be introduced without having to address the rigour required to meet the full flight safety standards of fly-by-wire aircraft. The aircraft was also fitted with the MODAS recording system and a telemetry system for trials monitoring. The aircraft became known as the Vectored thrust Aircraft Advanced Control (VAAC).

Over the period 1986-2004, several different control and safety concepts were developed with UK Universities and Industry. Simulation played a major role in concept testing and the Bedford Advanced Flight Simulator with its large motion capability was critical for this task. Concept designs were assessed against a range of flight specific tasks prior to flight trials. The most important task was the ability to land vertically on a rolling, pitching and heaving ship deck which was where the Bedford Advanced Flight Simulator with its visual and motion systems provided a risk free and realistic testing environment. This method also provided the confidence to proceed to flight trials and ultimately the first ever deck landing with what became known as the ‘Unified’ control technique.

The implementation allowed an untrained Harrier pilot to fly the aircraft like a conventional aircraft with the addition that there were no restrictions due to the conventional wing stall speed. Thus it made possible the continued control of the aircraft down to zero airspeed with the wing lift blending from aerodynamic control seamlessly to direct lift control from the engine without any additional effort required from the pilot, unlike the conventional Harrier. Initially the technique was not well received by the majority of experienced Harrier pilots.

Many further assessments were to slowly change the mind set with much discussion in two pilot camps as to the pros and cons of the technique. Between the mid 1980’s to mid 1990’s RAE collaborated with NASA Ames research centre into the application of advanced digital control techniques to support ASTOVL aircraft concepts. This joint platform provided not only an excellent exchange of ideas between UK and US pilots and scientists but also promoted pilot debate on the merits of such advanced control methods. Pilot acceptability remained unresolved up to the early part of the Joint Strike Fighter programme. Then the Naval Air Systems Command (NAVAIR) contribution to the programme through the JSF Program Office (JPO) became significant through a joint targeted programme in support of the JSF STOVL variant (Lockheed Martin F-35B).

The JPO continued to support further STOVL developments with several ship trials with XW175 and HMS Illustrious, HMS Invincible and the French carrier Charles de Gaulle. These trials introduced guidance techniques for automatic recovery along side a ship with an automatic vertical landing capability, some 30 years after the original HMS Hermes trials with XW175 in 1977 and some 35 years after the certification of Civil automatic landing systems back in the BLEU days. Technology advancements had bridged this time period and the gradual acceptance of the new control concepts.

With the established STOVL flight control standard, XW175 in its new livery continued to support JSF recovery requirements to ships with a 60 knot airspeed approach and landing method referred to as ‘Ship Rolling Vertical Landing’ (SRVL). This approach speed provided JSF with ship recovery flexibility as a percentage of wing lift at this airspeed would offset engine direct lift and enhance safety margins.

In conjunction with this programme ship deck lighting was developed for poor visibility and night recovery to ships. This programme produced the new ‘Bedford Array’ of deck lights to provide an unambiguous touch down point irrespective of the ship deck motion. The ‘Bedford Array’ with SRVL provided an effective and alternative solution to ship recovery at night in poor visibility and hence operational flexibility.

Having conducted its last research trial in support of JSF development at Boscombe Down on 18 November 2008, XW175’s final resting place remains to be resolved. BAHG has expressed strong interest in bringing the aircraft back to Bedford, its spiritual home. It is to be hoped that an appropriate resting place can be found for this illustrious aircraft of the Harrier fleet, but which became so unique providing the MOD with many products over its lifetime due to the combined efforts of all the pilots, scientific staff and engineers who had the great privilege to work with her. 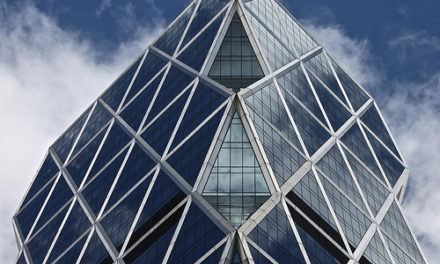 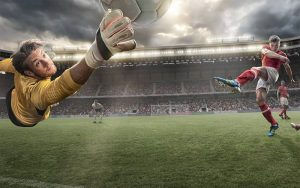 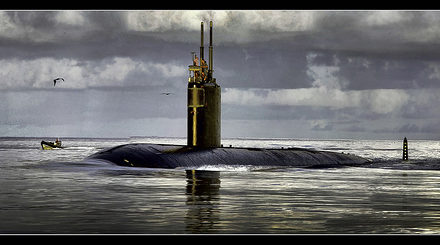 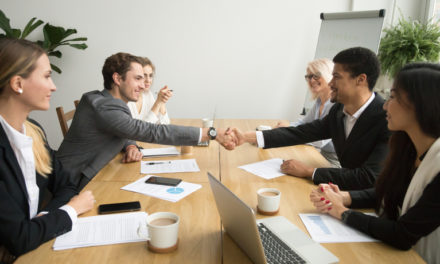 7 Traits That ALL Customer-Friendly LMS Solutions Have In Common